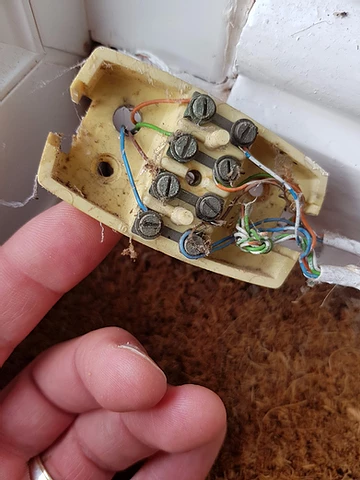 My customer reported that their broadband had become increasingly intermittent and drops out completely for over 10 minutes when their front door was opened and closed.

Upon initial inspection I located the main feed into the property. This is crucial to determine where and how the feed in from the local telephone exchange connects to your home internal wiring.

The main feed was just inside the front door connecting into a very old GPO junction point.

One of the main concerns here are that all wires are terminated and connected through.

(In case you don’t know, your telephone and broadband are delivered from your local telephone exchange down just 2 cores (1 pair) of cables. Hard to believe and it still baffles me but just 2 cores of copper cable, 0.5mm in diameter are all that is required to deliver super-fast broadband)

The problem with terminating all wires is that all connected cables thereafter can act as an antenna, picking up radio interference thus interfering with your broadband.

In this scenario just the orange and the blue on the left were the cables that were needed to connect but that’s not all that I was concerned about. There were lose wires on this pair which was probably the main cause for the internet dropping when the customers door was closed. In addition there happened to be 2 connections running off this main feed, so we have a Star Wired house. Not uncommon but extremely problematic when it comes to broadband speed and stability.

One of the cables from the GPO box connected to a telephone socket in the hallway and inside that socket was a connection onwards to a dis used alarm unit. 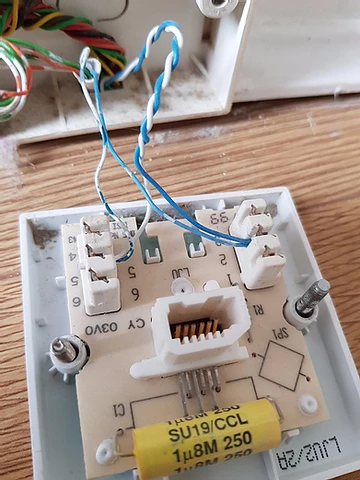 This was discussed with the customer who informed me neither were required, so I disconnected them from the circuit.

The other cable went in another direction to a BT80 connection point above the lounge doorway. 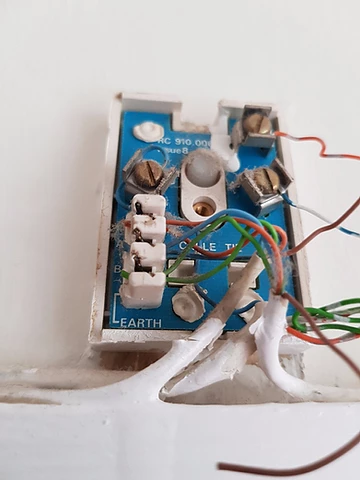 I dislike these types of connection points because they can generally be another point of failure and also encourage interference. However in this example, not only is there a BT 80 but the circuit is further star wired. One of the cables running to a telephone socket point in the living room where the router was connected and the other cable connecting a dis used socket further down the hallway which had been damaged some time ago. It’s surprising this customer had a decent connection at all but as they were on fibre the speed was pretty decent at around 42mbps down and 4 mbps up (albeit intermittent).

After further discussions with the customer about which sockets were required and which weren’t I then disconnected the redundant socket in the hallway and I jelly crimped the main feed into the Livingroom so we now had a direct feed from the old GPO (which I replaced with a new junction point) direct into the socket their router was connected to.

When all connection points were made good we tested the Broadband speed and found that the speed had increased from 42mbps down and 4 mbps up, to 52 mbps down and 8 mbps up.

When we tested opening and closing the front door the connection never dropped so we fixed the reported fault, tidied up the internal wiring and increased their broadband speed.

Supercharge your broadband by calling fixmyline if you are experiencing broadband connection problems or if you simply need sockets relocating. Advice is free and call out charges are 50% cheaper than your service provider will charge you.

We use cookies on our website to give you the most relevant experience by remembering your preferences and repeat visits. By clicking “Accept”, you consent to the use of ALL the cookies.
Cookie settingsACCEPT
Manage consent

This website uses cookies to improve your experience while you navigate through the website. Out of these, the cookies that are categorized as necessary are stored on your browser as they are essential for the working of basic functionalities of the website. We also use third-party cookies that help us analyze and understand how you use this website. These cookies will be stored in your browser only with your consent. You also have the option to opt-out of these cookies. But opting out of some of these cookies may affect your browsing experience.
Necessary Always Enabled
Necessary cookies are absolutely essential for the website to function properly. These cookies ensure basic functionalities and security features of the website, anonymously.
Functional
Functional cookies help to perform certain functionalities like sharing the content of the website on social media platforms, collect feedbacks, and other third-party features.
Performance
Performance cookies are used to understand and analyze the key performance indexes of the website which helps in delivering a better user experience for the visitors.
Analytics
Analytical cookies are used to understand how visitors interact with the website. These cookies help provide information on metrics the number of visitors, bounce rate, traffic source, etc.
Advertisement
Advertisement cookies are used to provide visitors with relevant ads and marketing campaigns. These cookies track visitors across websites and collect information to provide customized ads.
Others
Other uncategorized cookies are those that are being analyzed and have not been classified into a category as yet.
SAVE & ACCEPT